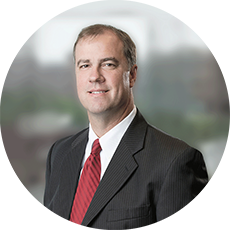 Ronald K. Wray II is a partner in the firm’s Greenville, South Carolina, office and is the group leader of the firm’s litigation practice. His practice focuses primarily on commercial transportation and complex litigation with an emphasis on railroad law, products liability, class actions, insurance coverage and appellate work.

Ron has been at the center of significant defense litigation in South Carolina for 28 years. He has tried over 50 cases to verdict including trials in South Carolina’s notorious 14th Judicial Circuit, considered to be South Carolina’s most dangerous venue. He also served as trial and appellate counsel in a landmark South Carolina Supreme Court decision that clarified South Carolina’s venue laws and helped end abusive forum shopping.  Among his other accomplishments, Ron served on a trial team that obtained a defense verdict in a multimillion dollar grade crossing accident case in Hampton County. He also was lead trial counsel for a major corporation in two cases arising from the Graniteville train derailment and was co-counsel in what is believed to be the largest property damage trial in South Carolina history. Ron worked closely with in-house counsel and a team of Gallivan White Boyd and outside lawyers to supervise and manage over 400 cases arising from the Graniteville train derailment.  He assisted in negotiating two class action settlements resulting from the derailment.

As an appellate lawyer, Ron has been lead counsel on multiple appeals that had a significant impact on South Carolina law. In addition to the venue case which helped end abusive venue shopping in South Carolina, early in his career Ron represented defendants in a case  in which the South Carolina Supreme Court adopted the public duty rule that shields police officers and governmental agencies from certain negligence claims. He also represented the State of South Carolina in two multimillion-dollar claims brought by the video poker industry. He served as co-counsel with his partner Gray Culbreath in a case of first impression in South Carolina in which the Supreme Court rejected assignments of legal malpractice claims.  Ron has also handled federal appeals before the Fourth Circuit and Third Circuit Court of Appeals and is admitted to the Bar of the United States Supreme Court.

A significant portion of Ron’s current practice focuses on the defense of the railroad industry and other complex litigation. He provides statewide, regional and national representation to Class 1 railroads and short lines. Ron is frequently called on to serve as local counsel in high-stakes litigation being handled by national and regional firms. Examples of his experience include:

While Ron is well-known for his service to clients and his legal skills, he is also committed to his family, church and community. He has served on numerous boards and committees and has been a volunteer driver for Meals on Wheels for several years. Ron is a past president of the South Carolina Defense Trial Attorneys’ Association, the largest civil defense group in South Carolina. Ron is proud of the relationships he has built with lawyers across the state, which serve his clients well when Ron is negotiating a matter or defending his clients in court. Ron’s professionalism is unquestioned and is a hallmark of his practice.